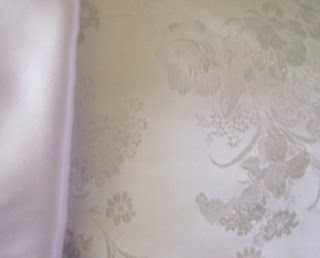 First off...the purse and shawl/cape fabric and lining. White crepe-backed satin for the lining and a white/silver brocade. The pic below shows nice detail of the silver accent. 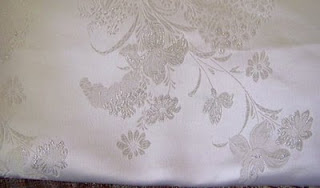 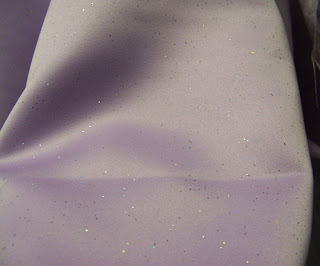 And now...the dress fabrics! To the right is the lavender dress fabric. It has a slight shimmer to it. 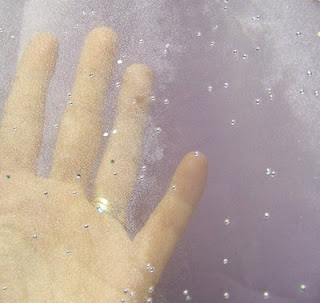 At right is the skirt overlay part of the dress.

And then both together--the tulle-like fabric over the dress fabric: 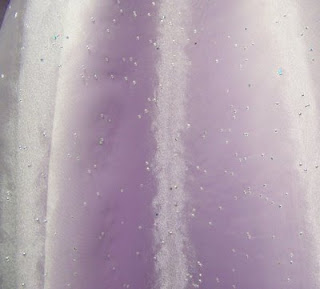 Which brings me to my next question. DD#2 wanted the overlay fabric on the entire dress. I told her that probably wouldn't be a good idea. She might have the little nubby crystals against her skin near the top edge and when her arms dangle at her sides. She's weird about those things.

I advised fashion fabric and overlay on the skirt portion or maybe the band and skirt portion only. So what do you all think about this?
In addition, my next question is, should I baste the overlay to the fashion fabric and treat as one layer? Or would it look better if both were free-hanging and hemmed separately. If the latter would be the case, would you hem the overlay slightly longer than the dress? I see that sometimes.

And for some reason, she has the crazy idea that these dresses are gathered at the top edge of the skirt portion when examining the Hillary Duff McCall's dress pic as well as her muslin based on the Simplicity one. I keep showing her the line drawings and explaining there's a reason why they're not gathered at that seamline. It would be too full. Most people probably wouldn't want gathering at the side seams because it's only going to add "fluff", rather than a slimming silhouette. She's having a mental block with this style. She doesn't realize that the dresses are designed with tucks in certain places for a reason. Most women do not want to look heavier. She's just not grasping that design concept well.

Anyway, I really want this dress to be nice on her. Hopefully later today I can draft the halter front and see how that looks on her as well. Time is going to fly.

Pretty fabrics! Here is a free stole pattern that just was listed on BurdaStyle...not sure if this is what you had in mind, but it's simple and versatile... http://www.burdastyle.com/blog/show/898

I've really enjoyed having a look around your blog today, keep up the good work!

It took me a couple of hours before I came across your site.Well, this post would be of great help to anyone who would come to read this one. Thanks a lot for sharing your thoughts. kamagra online