I asked Stacey about what colors and styles she wanted for chemo caps, and she said, "Surprise me." I warned her that was a dangerous statement LOL, and told her she be getting groovalicious fashionista chemo caps. You know, leopard print fleece with leather flowers! (She'll probably get one of those too :) .) But in the meantime, I made two more caps in a different style with ribbon flowers accented with hot-fix crystals.

Tomorrow I'm making a true red one with the band embroidered in a Christmas theme. Embroidery Library is having a good sale so I'll hunt up some nice designs. This is cute, quick, fun sewing and very purposeful. So meaningful when doing it for someone so special! 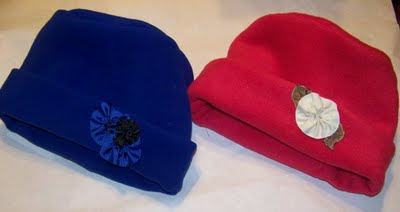 Thank you to the wonderful bloggers who added Stacey to their prayer list. She had her first chemo treatment on Tuesday. I made one chemo turban last night, and finished the second this morning. I sent Stacey links to different sites that had different styles of chemo hats so she could see different kinds. The ones that I made below are from the Charitable sewing projects at http://sewing.org/ . Nothing hard about them, but I found the depth of the tucks in the back of the chemo turban (3/4") may actually be too deep, not giving enough head depth. I told Stacey to let me know if the tucks need to be let out on the red hat. That one has deeper tucks than the blue.

Here are the chemo turbans. The front has a band loop at the CF. I embellished the band on red turban with a black, embroidered flower in my embroidery stash. If she doesn't like it, I'll remove it. 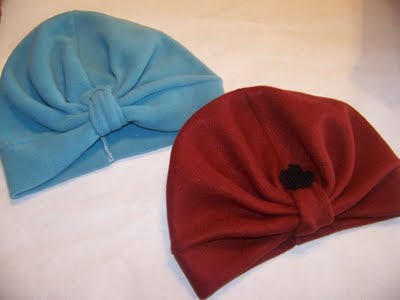 Here is a view of the backs. Notice the tucks in the red hat are deeper than the blue tucks. Well, it might not be that evident from the way the hats are displayed, but the head depth is definitely different. 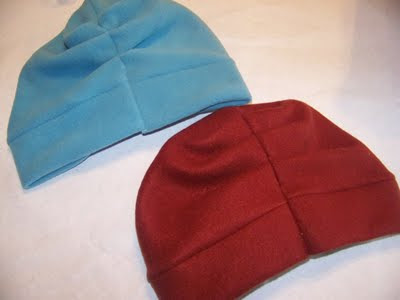 Hopefully, they will have a new home with Stacey tonight.

Ah...that UFO I posted about a couple of days ago? It's done. BTW, thanks to my blogging friends that wished me healthy vibes :) . Today was my first day back at the gym since Friday and I'm pooped! Still not 100%, and my cardio routine gobbled up most of my energy for the day. (It's why I'm sitting here typing this post in the middle of the day.) But anyway...

I finished the first of three hunting projects for Rich back at the beginning of October, just in time for archery season. It was a hunting "thingamajig". Can't remember what he called it, but he really likes it. So I dawdled with projects two and three, but knew I had to get them done before deer season starts the Monday after Thanksgiving. So as of yesterday, projects two and three are done!

Here is a pic of the pad: The back was reused, along with the velcro straps on the front. But the camo fabric was replaced, velcro straps, reattached to the new front, and restitched to the original back. Here's the front:

Here is the back. It's the original back that was still in decent shape.

The third, and largest, project for Rich was the tree stand cover. He wanted something to take the bite out of the cool, Autumn "breezes" while sitting in the tree stand waiting for the right doe or buck to come along. The tree stand cover took somewhere between 3-4 yards of fabric, and the picture below shows the back of a small portion. The velcro on the top will go around the railing of the tree stand, and the pockets at the bottom are for supplies and/or small rocks or wood pieces to hold down the cover so the fabric flaps aren't flying all over the place when it's windy. It's not one long pocket, but rather a long pocket with vertical stitching channels to create several separate pockets along the bottom edge.

The tricky part to the tree stand cover? Using industrial strength velcro, the kind with the adhesive back not meant for machine sewing. After one hellish struggle on my machine and breaking a needle, I searched the Internet for tips. One great tip turned up: You can stitch the industrial strength adhesive velcro BUT sew slowly and clean the needle with alcohol every 10 stitches. Quite time consuming for all the strips I had to stitch to the fabric, but it worked like a charm with no needle breakage. 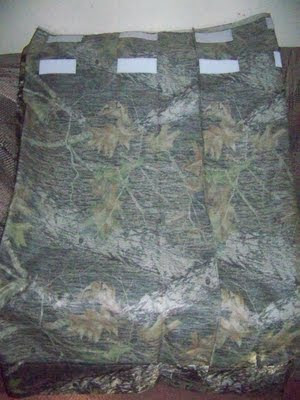 So now I'm moving on with trying to do reviews of two blouses, and hopefully making more chemo hats and DD#2's pants. More to come, very soon :)
Posted by Kat at 1:01 PM 1 comment: