Let's just say I love this dress!  So much so that I'm going to make one for myself.  I'm modeling the one made for my oldest daughter who always needs something for her sorority functions.  It's her second LBD in that many months.  The first was reviewed a few weeks ago on my blog, McCalls 6111.

My full review of this pattern can be found at PR.  It's a dress that you really want to read all the reviews, google for information before you ever lay a scissors to your fabric.  There are some issues, but none that can't be worked out beforehand.  Doing so will create a beautiful dress with a beautiful fit.  My review includes all the particulars including fit issues I encountered as well as all my alterations.

Still deciding...do bloggers want to see the full review on blogs?  Some do, some don't, and I haven't been blogging a while so I just decide to keep my full, detailed reviews on PR.  Please let me know.

And now, without further adieu, here is McCalls 6460:

Swing Jacket is a Simplicity Retro pattern, leather purse with custom-made handle was created from the book, Vintage Bags, and a reminder to never arch back for a posterior shot.  My poor satin backed crepe started puddling on me :( .  Otherwise it was looking pretty good.

It was interesting to me at first, then a bit disturbing when I was viewing a recent JC Penney ad.  I'm not sure, but I think it might be a case of photo trickery.  So I decided to ask my husband.

Here are two pics from a recent ad.  Look at the models on these two pages.  Yes, three of the four pics are of the same girl.  But look at the thighs.  They look almost identical in all four pics.  All four have that "inner thigh gap" as if thighs should not be touching.  Each picture appears to have an indent about 4" below the crotch line.  Forget trying to slide a manilla folder between their legs, you could slide a 2X4 right through without it every touching their thighs lol!  Very few people I know have thighs like that.  There are some but they are a tiny minority. 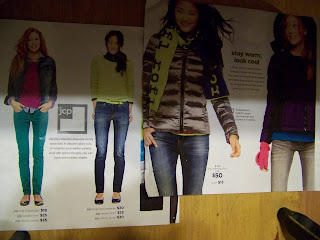 Point is, I hate advertising like this.  As if they pants they sell are going to make us normal people look like we have this huge inner thigh gap.  Or like it's even desired.  It's not normal.  Not that it's abnormal, it's just not a mainstream look and most women and teens I know are simply not built this way.  Except for that very small minority.

Now, look at a model from another JC Penney ad.  It was either the same ad or maybe a week or two apart.  This model has realistic hips and thighs.  They are fuller and normal looking.  No, not heavy at all.  Simply normal like the way many of us are built. 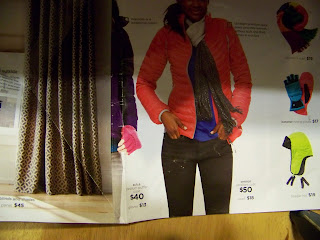 Please JC Penney, use young teens in your ads that have thighs built like the majority.  Go for the manilla-folder-could-fit-between-the-thighs look.  Not a stinkin' 2X4.  And if these pics were photoshopped like many are, shame on you.
Posted by Kat at 6:19 PM No comments: