Pitiful blogging. The same goes for my blog reading. The days have been so busy, and I'm trying to squeeze in sewing any chance I get. It doesn't leave much time for blogging, nor blog reading which bothers me. I have four blog posts drafts that have gone unpublished too. But this one will be posted today!


Thanks for your kind words and empathy. The Shannon I talked about in my previous post is Shannon Gifford. Not to be confused with my friend Stacey who is also battling cancer. Stacey's prognosis is very good. She finished chemo two months ago and is now finished with radiation. Remission is expected at this point, for which we are all very thankful. Shannon's cancer, however, is at the untreatable stage. I read her husband's blog at least every other day. It is very touching, such a beautiful love story. I pray for two things every night. A miracle, or that she has very little or no pain.


Sewing has been my hobby since I first stitched on a machine at 12 years old. Fitting, however, has been something I've only learned in the last 5 or 6 years. I've always referred to my respect and admiration for two fitting gurus that have been so helpful via online classes, emails, etc., and those two women are Shannon Gifford and Jean Haas. There are so many of Shannon's class folders on my sewing shelf, some of those classes I've taken at least twice because there is always more to learn, even if it is the same class. Please say lots of prayers for Shannon. She is an incredible person, and those words seem so lame for the kind, caring, helpful person/instructor that she is. She is one of the people that has had such a profound influence on my favorite hobby.


As mentioned above, I've been sewing trying to squeeze in whatever I can whenever I can. I have yet to review so many things, but here are some of my recent projects.


This one is a leopard print fleece jacket. The fleece was purchased for one of Stacey's chemo hats, but I ordered more than enough to make a jacket too. That was my original intention. 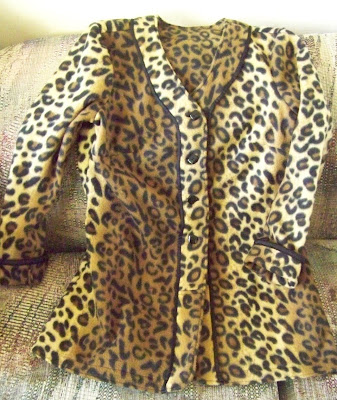 I used the Textile Studio Capri Jacket pattern. It has taken quite a different look than the black lingerie robe, huh? This pattern was selected because all the alterations were already done. The one thing I forgot about was to change the bust dart to a princess line! Imagine--a dart in fleece! It annoyed me, but it worked out just fine. The dart wasn't too bulky, and I slit the dart up the middle to about 3/4" from the point to flatten the bulk at the side seams. The dart gets kind of lost in the print anyway.

Another thing about fleece--I HATE facings. They're usually turned to the inside and kind of bulky. So I took a tip from Nancy Cornwall's book and turned the facings to the outside and binded the edges with black lycra. I also bound the edges of the sleeves with lycra too. The pic shows the sleeves turned up, but they can also be worn down. I like this option because outside it gets worn long, inside it gets turned up to free up my hands a bit. The inside of the jacket is so neat and tidy with the facings turned to the right side. After the lycra was attached, I stitched-in-the-ditch to attach the facings to the jacket. Here's a pic of the "clean" neckline interior and the finished facings turned to the right side. 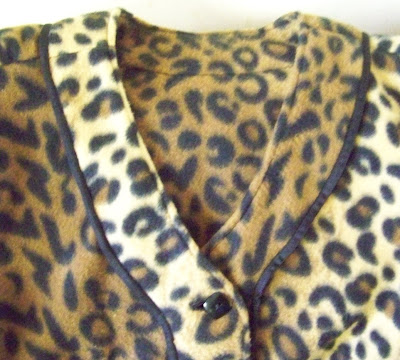 This was one of those projects where I thought it would turn out "okay", but then realized I absolutely loved this jacket. Even DH commented that he liked it. I've worn it out twice and have gotten so many compliments on it too. He also asked, "Didn't you make a bra out of that material?" No, I didn't. I told him I wanted to make a leopard print bra and panty set a while back, but that would be nylon/lycra, not fleece LOL.

Next up is DH's jacket. It's a Kwik Sew, not much to write about it except that DH hasn't worn it as much as he should be. After complaining for a while that I never make anything for him, I finally make it and he hasn't been wearing it. Okay, maybe once or twice. It does need a light, warm pressing on the bottom and sleeve ribbing to clean up the look, but other than that it was a relatively quick and easy project. I would much prefer, however, that the upper part of the jacket was lined to hide the facings and neckline seaming. At least with a lightweight 100 weight fleece. This black MM fleece was bulky (300 weight), but a nice lining would have made it look more professional on the inside. 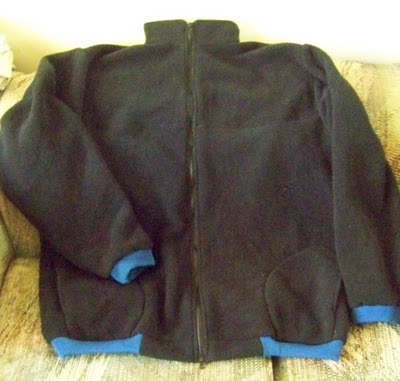 Did I just say that (again)? What's going on with me???? Since when have I ever been that concerned with my seam finishes on the inside???????????????????? And another thing because there REALLY must be something wrong with me...

...THIS is what I'm working on below.

GASP! Yes!! They're draperies...I'm working on draperies. Bear in mind, I have never liked home dec, yet these draperies aren't that bad. In the pic above, both panels have been hemmed on the sides and bottom, the header already is prepared with buckram, and the pleats and spaces have been marked completely on one side. I'm making a mirror image of the markings on the other side.


These draperies will replace the poor-excuse-of-vertical-blinds that have been up in my living room for the past 20 years. They have long seen better days. Some of the blinds are missing, they don't hang right anymore--very sad looking.


Below is a closeup in sunlight of the color of my carpeting (well it used to be that color since that's old too now), as well as a paint palette (sp?) I'm consider for my walls. One of my next endeavors under consideration is making slipcovers for my sofa and loveseat. Wouldn't it be nice to have a living that has an entirely fresh new look? My house is so stale and boring looking, and I have no interior decorating taste. But I'm trying! Really trying. Hopefully this weekend I will have some new draperies up and ready to show the world. 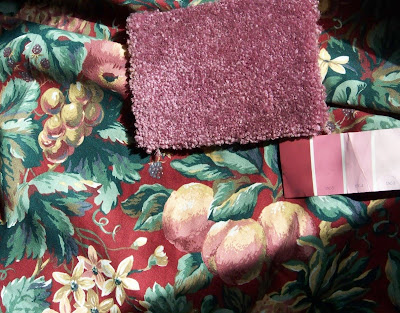 Right now I leave you with a short video clip of Jake, who loved it when I was cutting buckram for the drapery header. The buckram wants to roll into a tube, and guess who loves to try to burrow--Jake!

Here's the link because I haven't learned how to embed the video clips right into my blog. Can someone help me with this?

And if you want to see some really cool, cute cats, check out (what I think are) Jake's half sibs. I believe they're Devon Rex/Sphinx hybrids. I'd sure love to have one, but we're committed that Jake is an "only child".

Everything Pales in Comparison

Just noting this. Everything pales in comparison when you think of one of the most inspirational people in your life with terminal cancer.

Yeah, I just found out that Shannon's cancer is terminal. Let me just say in uncharacteristic words for me, this really sucks. Really, really sucks. There aren't any other words to describe it. I'm going to sleep on this tonight. Please pray for a miracle.
Posted by Kat at 10:37 PM 5 comments: