Last week at this time, I had just received two of the necessary fabrics in the mail to make my contest entry.  Saturday I retraced my self-drafted pattern from my red knit dress, and on Sunday I drew new style lines as per the Sears Kardashian dress style.  Monday and Tuesday were spent sewing, Wednesday was finishing details, and Thursday was the photo shoot, writing the review, and entering the review in the contest.  Whew!!!

Here is the result of a whirlwind last four days!

The original style I was copying is at left from the Kardashian dress line at Sears with my Knockoff version at right: 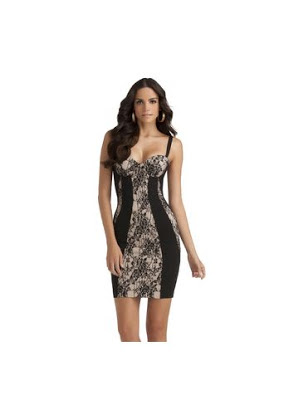 It's a fairly close copy.  My pattern was self-drafted.  I made modifications to the self-drafted pattern I used in my red lace knit dress from a couple of posts ago.

The red lace dress had vertical princess seamlines.  This RTW Knockoff also has vertical seamlines, but they're curvy ones as opposed to being straight.

My bra cups were self drafted from a RTW foam bra.  A seamed bra would have been easier to draft a pattern from, however, I don't own any seamed bra because I just don't like it when the seam shows through tops.  I used a Wonder Bra (I think I own at least 8 of the same style lol) with foam cups to create a paper pattern for the bra cups.  It's not an easy task, but it's not hard either.  In a month or two I will explain how I went about drafting the bra cups and the dress.  It is a process I think any Advanced Beginner sewer can tackle.


Here are a few more pics of the front:

Can't forget the back now, can I?

A few things about the dress and I have mentioned this in my review for the contest.  All of them are likes, and I have no dislikes about my dress.

1.  The design has been engineered for a 40+ body instead of a 20-something one.  What does this mean?  It's all in the details, my dears!  See how the original dress has round bra cups?  I could have made mine just like that, but I chose to draft my bra cups to come up high to the arm crease.  Trust me, it just looks better on an older body and many of my 40+ sisters will know exactly what I'm talking about :).  Even though I'm a gym rat and Eat Clean fanatic, there are some things that we just have to accept and lipo is not my thing.

2.  This relates to No. 1.  When I'm wearing a dress like this, I don't want to have to wear a bra.  Finding a bra that works with a style like this is just too darn hard.  Either the straps won't be placed right in the back, they'll slip and be seen at the front or shoulder, or the front bridge of the bra is too high for the low V of the dress.  I engineered the dress to be snug, the bra cups giving me support, good coverage, and lift just like my original Wonder Bras.  In addition, when I made the cups I used black spacer which can be purchased from Spandex House in NYC.  Two layers of spacer were used for each cup because I felt this was more in line with the thickness of a Wonder Bra with the spacer being covered with fashion fabric.

3.  Ahhh...I love my centered zip!  I loathe invisible zips on snug/close-fitting garments.  They just don't work.  I have two daughters that can break a RTW invisible zip in record time, and they've done just that.  I HATE redoing broken zippers and can't understand why so many manufacturers use invisible zips.  Let's just say they haven't met my daughters.  I'm betting that if every female returned garments to stores that had broken invisible zips, maybe more centered zips would be used.  That's my theory and I'm sticking to it!  :)

4.  My fabric.  I love the blue leopard print.  I can't remember exactly where I purchased it (either Spandex House, Spandex World, or Fabric.com), but I love it.  The black panels are cotton lycra purchased from Spandex House in NYC.  It's a nice weight, not beefy, not thin, just right.

5.  Let's talk cost.  Could I have afforded the original which is on sale at $59 on the Sears website?  Of course!  But that's not the point.  I wanted that dress, but I wanted a fit that molded to my figure, not to the 21-year old fit model.  Would an off-the-rack garment fit me just as well?  No.  Maybe the bra cups would gape, I'm sure there would be a few things I could pick out that wouldn't fit me just right.  My version gives me a custom fit at a rock bottom price of $12-$15 and that includes the thread and zipper in addition to the material.  I actually have enough material to make a second, identical dress.

Which leads me to another question my hubby asked me:  "Why don't you just buy the dress?  It's only $60!"  Well, what fun would that be?!?!  We garment sewers like the challenge of recreating RTW that fits like a glove.  It's a tremendously rewarding, nerdy activity to be able to construct a self-drafted pattern to one's measurements, pick out fave fabric combos, tweak fit in fabric, and produce a result that would fit better than RTW and flatter a body of my age group.

Believe it or not, the hardest part of making this dress was tweaking the fit with curvy seamlines that intersect with other seamlines.  Also, I work with 1" seam allowances to be able to easily tweak the fit, and the seam allowances would get in the way of the seams with all this flopping around of seam allowances on the inside of the dress.  Frequently I had to double and triple check to make sure I was adjusting the correct seamline lol.  The seam allowances were eventually trimmed down, but it was a little bit of a challenge at times during the fitting process.

So there you go!  My RTW Knockoff entry for the PR Contest.  I now understand why this contest is a fave among several PR members.  The entries are so good that it raises the bar for sewing, fit, and style.  When that happens, it pushes us to do our best work and be able to showcase our efforts.  The contest gallery does not disappoint!  I am amazed at the beautiful knockoffs created by very talented seamstresses.  Would I like to win?  Absolutely :) !!!  However, every contest entry is a winner because of how high the bar has been set high for this contest.  Every entrant rose to the occasion and produced awesome garments, and I'm still in awe of the amazing work.  I thank every entrant who made me work hard to produce a garment worthy of entering into this contest.  Hats off to this incredible crew!