I placed two orders last week from fabric.com. 3 fabrics in each order. One had wool suiting, wool/cashmere melton, and black fleece.

The fleece was a big disappointment. It had deep, vertical crease lines running from selvedge to selvedge. I need to return it. All four yards of it. I went out to JoAnn's today and bought 4 yards of their anti-pill fleece. It looks so much better. The wool/cashmere melton was advertised as being suitable for something like a coat or winter jacket? It's more like suiting fabric if you ask me, but I'll keep it. It is nice, just much thinner than what I was expecting. The wool suiting was really nice though.

Second order was a green rayon/lycra knit, a stretchy, black don't know what (DD#2 put it in the cart), and a lacy-look ITY. The ITY looked terrible, nothing like the screen pic. That is going to be returned as well. The other two were nice--they're keepers.

So 4 out of 6 were good, but the two stinkers have to be returned. I think I need to head into NYC PR Weekend for some nice wool. Paron's anyone?
Posted by Kat at 10:17 PM No comments:

Sewing a lot, Writing a little.

What's a sewing review? I finally did one last week. Blogging and pattern reviews the past year have taken a serious hit. So here I am, the morning after Superbowl Sunday, playing a bit of catch-up on my blog.

I really have been sewing. What has been made recently: a grey jacket for DD#1 who is away at college, 3 pink hats with her sorority letters, a tote, a black dress for DD#2, a blue dress and an orange dress for DD#1, a blue dress for me but no pics of that as of yet. Projects that are brewing: maybe entering a pair of jeans in the jeans contest at PR, another jacket for DD#1, a suit for DD#2, and a multitude of dresses and shirts for DD#2. Here are some of the finished projects:

DD#1 asked me to make her some fleece hats for cold days in the city at college. She pledged a sorority last Fall so a hat request was in order. My fabric stash is too big, thus a request for one hat became three. Trying to trim the stash a bit. She can pick one and give the other two away. This was a pattern from the book Polarfleece Pizazz. The hat style is okay. Other hat styles are better but this one will suffice. It's very quick and easy though with the serger. All three hats can be assembled during the TV commercials of a one-hour show. Seriously, it took no time at all. What gobbled up the time was tracing off greek letters onto fabric, making the applique, satin stitching the edges of the applique on the hat, as well as embroidering the band with the script letters. 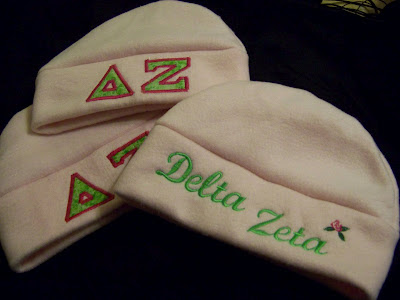 DD#2's dress. This was McCalls 5893. It was a tank style maxi dress. I made it a one-shouldered dress and shortened it up quite a bit. Added a self-drafted ruffle along the top, front edge.

My daughter's jacket. I told her I'm not sending it to her unless I get pics of BOTH her dresses lol. She only sent me one for her blue dress. Still waiting for the orange one. This jacket is Simplicity 2024, and the black fleece should arrive in the mail any day now to make version 2.

This is Butterick 4364. It has about 3 different bag styles, and I used some retro fabric from my mother's stash which she was getting rid of. You know the fabric is old when one of the widths was 36" lol. These three fabrics were from the early/mid 70's. The button was purchased from a local fabric store. What a don't like--the buttonhole closure. Next time, it will be a magnetic snap. 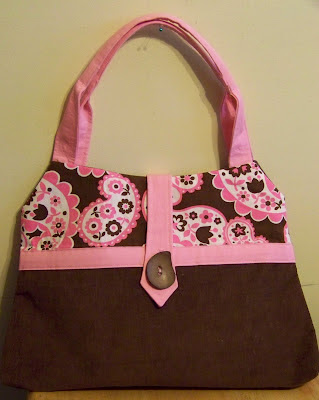 DD#1's blue dress. I'm finding it hard to recognize my daughter lately because she dyed her hair brown lol. This is a morph of two patterns: Simplicity 2364 (one-shouldered top) and McCalls 5893 (elastic empire line down to hem). 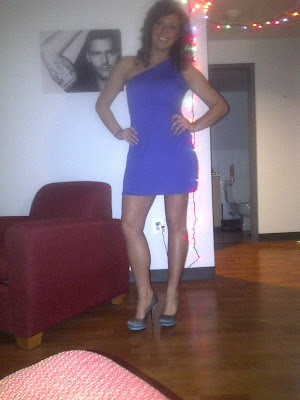 That's it for now. Still waiting for DD#1's orange dress pic and have to get a pic of my blue holiday dress. Maybe sometime soon.