I do. My cat does. DH did too, and so did the fireman collecting money at the coin drop.

The leopard I'm talking about is my Textile Studio Capris Jacket in leopard print fleece. When I originally purchased the fleece from Fabric Mart for a chemo hat for Stacey, I purchased extra because I wanted something "leopard" in my wardrobe in addition to my leopard print skirt made several months back. I finished this jacket a little over a month ago but haven't modeled it, nor have done a review yet. Hopefully I'll get a review done tomorrow or Tuesday.

Here is the jacket front:

And now the back:

The pattern style wasn't changed much from the pattern, but it does look different. The first time I made this jacket was for my lingerie ensemble for the Lingerie Contest. I used a black panne velvet with lots of drape. However the fleece gives the jacket an altogether different look. One of the things I don't like about fleece jackets are the facings. They tend to flop around if not tacked down, so I took a tip from Nancy Cornwall (auther of the Polarfleece books) to turn the facings to the outside. I think that really makes the jacket. I trimmed the edges of the fleece with black lycra in my stash. The sleeves are long, but I can turn them up to a cuff as shown in my photos or worn down to cover the top part of my hands when it's chilly outside.


DH gave it a nod and said he liked it. The fireman at the coin drop growled at me and asked me to show him my "claws". I must admit, it was the first time I've ever been embarrassed about my short, stumpy nails. He was disappointed that I didn't have ones to match the jacket LOL. Jake LOVES my jacket. When he sleeps, it looks like it was made just for him. And as for me? It was exactly the jacket I wanted. I was thinking it would just look okay, but I loved it when it was finished.


Next up, I'm working on my CJ Wrap top shown below
. 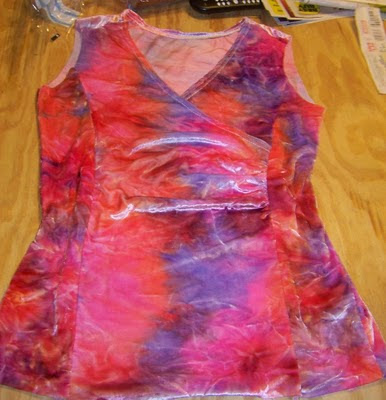 It's been hanging out on my sewing center in my kitchen for a week since I've been busy with prom dress alterations. I have to cut the sleeves for it, but they will be 3/4 length because I'm short on fabric. This velour stretch knit from Spandex House in NYC has been in my stash for maybe 3 years? Possibly more. The only thing I don't like about it is that it "changes color" depending on the angle. The colors in the pic look really bold (that's to my liking), but it changes to light and frosty coloring from a different angle. Love the intensity, not the paleness, so this chameleon fabric is not my fave.


The fabric does not have the recommended stretch so I had to use smaller seam allowances too. It's about 20-25% stretch. I'll probably end up taking in the waist side seams a little but I'll need to alter with a swayback tuck above the waist before cutting out another top from this pattern. The sewing side of my brain envisions a LBD from a black knit from this pattern. Lengthen it, tweak it, and voila! It would make a perfect dress. Gotta love those princess seams too.

It's that time of year again--The Prom! (Can it really be 26 years since "MY" Senior Prom???) My oldest is experiencing that wonderful time of her Senior year, those end-of-the-year festivities. (On a motherly note, I just ordered her graduation announcements.) This year she attended two proms. The first was last week with her guy friend. This was his Senior Prom, not hers. Don't think he's a boyfriend in the true sense of the word, but she's a picky girl like her mama and doesn't want to take just anyone. Neither did he, because according to his Facebook page, he doesn't like dumb girls.

Here's they are in their prom finery: 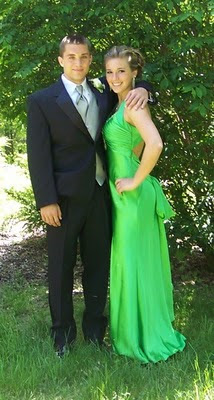 I had to go on a field trip last week for DS#1, so my mother took care of prom activities for me.

She told me a cute story when he came over to pick up DD#1. He wasn't dressed for the prom, but had his tux in a bag in his car. As soon as he came through the door, DD#1 was making her way down the stairs and he looked up, his smiled a broad smile and gave a most approving look ;) . Like a Wow! moment. He quickly dressed for the moment so my mom could take pics. She snapped a couple of good ones below: 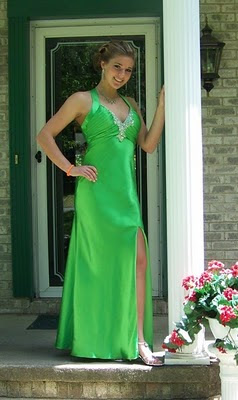 Fast forward one week later to today! My daughter went dateless to her own prom because according to her, "There's no one I want to go with from my school." The guy she went with last week had a previous committment for this weekend. So now I present you with some 2010 Prom Fashion Eye Candy. It was so cool because no one had the same color dress.

Here's DD#1 today modeling the bustle I created for her. We experimented with different effects, but this is what she wanted:

Here are the first pics from this afternoon. The beautiful girls modeling the front of their dresses: 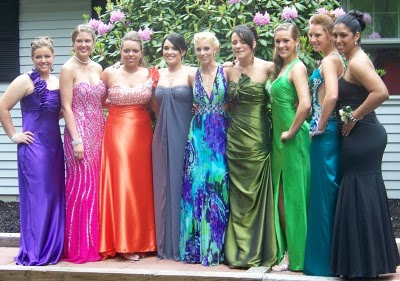 And now the backs:

Here is DD#1 with one of her lovely friends. I created her bustle as well, and rehemmed her dress. She paid $60 to have her dress hemmed by someone else and it was uneven and too long on the sides (the sides only and I don't know why.). I told her I wouldn't charge her a dime UNLESS she told other people ( BEFORE the prom) I was doing some of her alterations. I certainly didn't need a slew of requests because I'm still very busy with doctor and physical therapy appts. as my arm and torn tendons are still healing. There's only so much work I can do and do comfortably. I'm not going to push it. I LOVE, LOVE, LOVE the cutouts on her dress too. 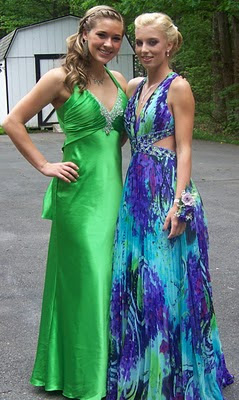 Another pic of DD#1:

After 15-20 minutes of parents taking pics, the "limo" arrived. This morning I asked her how many people were going in the limo and she said about 25. 25?!?! What limo seats 25??? It was a limo BUS!!! Here is DD#1 expression after she saw the interior of the limo bus. 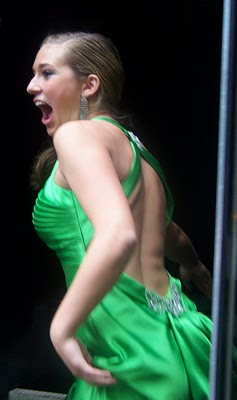 I had the same response! Check out a view of the limo inside: 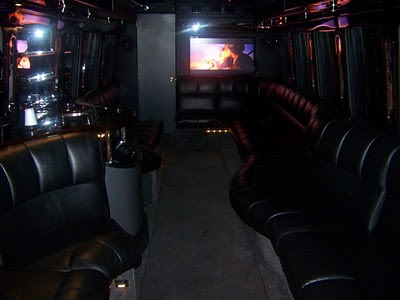 Here is the entire group of girls in front of the limo bus. An absolutely gorgeous group, and all totally different and lovely gowns. 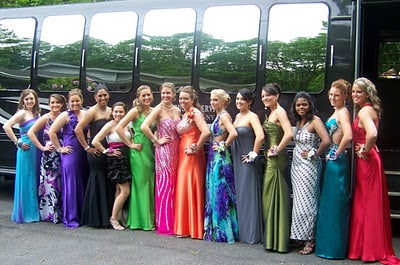 And finally, DD#1 asked a mom to take a pic of us both. Now why didn't I think this would happen? I would have picked a different purse LOL, one that matched. Instead I have a big epipen sticking out of the front, a huge purple key loop on my arm, and a big, ugly elbow brace. Didn't think about that at the time. At least I'm wearing a shirt I made :) ! Last but not least, I leave you with the bustle I created for her friend. We experimented with different effects and she chose this. I found two perfect, crystal colored buttons that matched her dress perfectly. Since she had a CB zip, I had to attach the buttons to the side of the sip. I tacked Timtex interfacing to the back for stability when attaching the buttons. The loops were *supposed* to be serger chains using decorative thread in the upper looper, but as I was threading my serger it decided to pop a spring from the knife. #*(@#*$(@*(#$&* So...I simply took three strands of Decor 6 decorative thread and braided it. I created two loops for the buttons to attach the bustle once the dress was zipped. I also stitched a "security loop" from black ribbon on the inside of the bustle just in case of a wardrobe malfunction (broken loops). Those loops were really stitched in well so I don't think loop failure will occur, but better to be safe than sorry.

And a final note to Connie! You SHOULD have kidnapped me for fabric shopping!!! I'm SO sorry I missed you guys in Philly, but here's a very positive note: DD#1 is going to college in Philly :) . So I'll be down there a lot. So looking forward to next year, and I missed seeing the sewing group very much.

Happy Mother's Day to all Moms!

Today DH made breakfast and "Linner". On Sundays, we really don't have lunch, but a meal around 3 or 4 that is a combo of lunch and dinner; hence, "Linner". It was delicious. We have the same breakfast most Saturdays and Sundays, but it always tastes better when someone else makes it. My eggs, bacon, and toast were mighty tasty!

For Linner, he prepared Citrus Tilapia, Mashed Potatoes, and Broccoli as per my request. DD#2 made a cake, DS#1 helped out a little, DS#2 gave me a neck/back rub, and DD#1 brought me home a Rita's Ice.

During dinner prep, I decided to do something for myself. Garment sewing has been so slow lately, but I managed to pull out my CJ Princess Seamed Wrap Top pattern. This is the one I bought a year or two ago and have really been itching to whip this one up. I traced off the small, used a single knit stretch muslin fabric in my stash, and stitched up the muslin in about 1 1/2 hours. Very quick and easy!

Here is the pattern and the muslin: 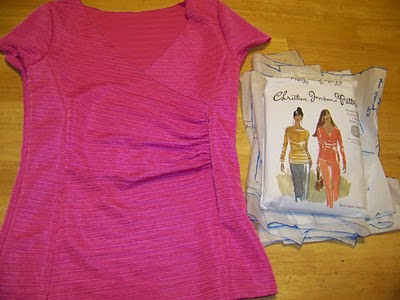 Let me tell you, this muslin "knit" is one that has minimal stretch, and although I used the pattern size that corresponded to mine, it was like a sausage casing LOL. Generally, I don't like super fitted tops, but this one was super snug. Even in the knit with the correct stretch percentage, the super close fit would not have been to my liking.

So I traced off the Medium using Small Shoulder seams. I don't want the crossover to come down any lower. That was my only issue. I will also move the entire shoulder seam forward by about a 1/2" and add princess seams to the back as a "just in case" measure for fit purposes.

I love this style and will whip up a wearable muslin tomorrow using the new size cut out. Also will check pattern reviews too.

Hope everyone had a nice day, but on my end I'm almost falling asleep at the keyboard. Good night and happy sewing!
Posted by Kat at 9:17 PM 3 comments: