Did you ever have so much to do that you let the little details slide?  I'm sure you have because, well, who hasn't.  The little details that I have let slide are blog posts.  So...instead of doing a blog post on several of my projects I've completed throughout the year, I'm going to do a single write-up about my sewing endeavors the past several months.

Let's start with Spring!  Think fresh and pretty.  My inbox was inundated with emails from my daughters with comments such as, "I like this dress!" or "Make this one."  We narrowed down the choices to these lovely creations, a beautiful ArdenB and a dress from an unknown source. 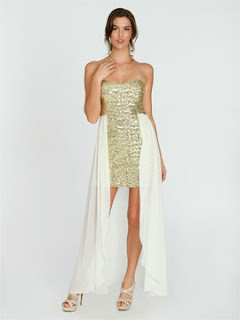 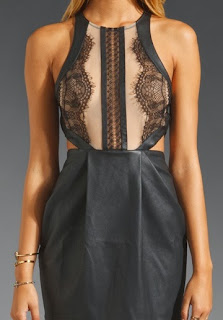 One of the things I love about sewing is taking an Internet pic or something that has a high price tag and see how low I can go in regard to price.  Sometimes I'll splurge and buy some really wonderful fabric from a NYC store, other times I'll snag some yardage at Walmart.   The other part of the challenge I love is to see how closely my garment can be copied from the inspiration pic.

Overall, I think I did pretty well!  The one at the left hasn't been worn yet.  My oldest daughter is hoping to wear it to an event in the Spring of 2014.  I'm hoping to get a pic, but here it is in a pic comparing it to the original.  Sure wish my camera was available to snap a pic during a fitting but oh well. 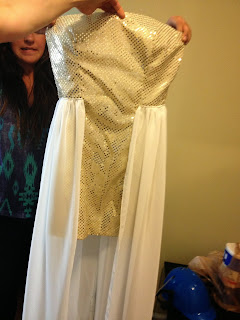 One of her first comments during the final fitting was, "Wow!  This looks just like the original."  Yes, it sure did :) .  As for the price point, I believe the ArdenB was well over $200 which is too high for a poor, college student's budget.  I made it for a whopping $20.  Seriously.  The chiffon was purchased via an online sale (probably fabric.com), and the sequin fabric was a found at Walmart in their prom dress fabric section.  The sequin fabric is definitely not high quality by any means along with being somewhat sheer, so I backed it with a medium-weight cotton muslin to beef it up.  Cost of sequin fabric?  $2.14.  Cotton muslin?  About $6.

I call this a disposable dress.  It's not meant for more than 5 or so wearings, but with a dress like this that doesn't seem to be a problem. The style certainly is not for everyday wear.  The chiffon can be removed and reused for something else.  In fact, I'd remove the lining with the boning and reuse it for another dress.  So why did I even bother to make it?  It was pretty much the Halloween costume principal.  Make something perfect for the occasion and then move on.  It's just that the occasion hasn't happened yet lol.  It will, though, and I hope to get a nice pic of the dress being worn.

Moving on to the dress from the unknown source.  My younger daughter wanted this dress for one of her college events.  I had black pleather in my stash along with some flesh colored knit and black lace.  I purchased one more piece of lace to pull a copy together of this dress.  Was I able to accomplish a RTW clone?  You betcha!  Here is her dress on my dress form. 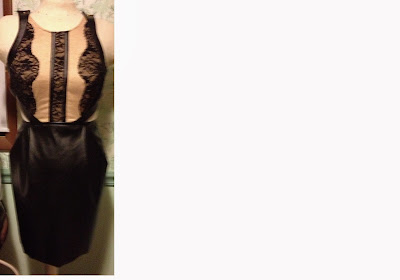 This was another "Wow!"  My younger daughter was amazed at how much it looked like the inspiration pic.  You think she could have thanked me with a pic of her in it?  She should have but didn't :( .  Oh well.  Live and learn.  Make sure to get pics of them in it with the threat of never making anything else for them ever again :) .
A few more requests were sprinkled in here and there over the next few months.  This was a leopard-print cardi I made for my younger daughter. 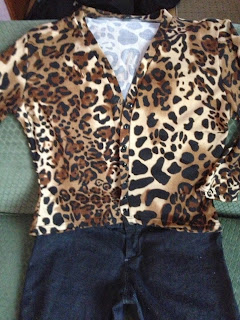 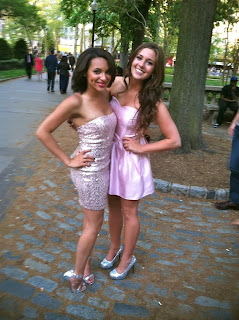 And then there was a spring semi-formal dress made for my older daughter from my fave vintage Butterick.  Again, this is the best pic I have of her in the dress which isn't the greatest.  I also created a lace-up corset back for this dress which was beautiful (one gentleman on the city streets asked her if she was a doll lol  :)  .  She is on the right in pink.  She loved the dress, and just a few weeks ago was asked by one of her sorority sisters if she could borrow the dress.  Too bad she spilled wine on it, but I'm going to see if I can get it dry cleaned and maybe the stain will come out.  Luckily, this was another one of those "disposable" dresses with Walmart fabric because this girl will take care of a dress until she wears it.  After that, it may never see a hanger again lol.  It sure did look lovely though.
Moving on to skirts.  Stay tuned for Part II.
﻿
﻿
Posted by Kat at 7:35 AM

simply beautiful!!!! I envy you having daughters to sew for!! My boys (actually adults now) only ever want pajama pants. I can make them in my sleep!!! LOL

Amy, pajama pants are not necessarily a bad thing ;) . My daughter just complained to me on FB that she is still waiting for her wool coat she put in a request for 18 mos. ago. Had to remind her about all the other dresses, skirts, swimsuit tops, dressy top, etc., that I've made for her, while she remembers the one thing I didn't get too lol. As I'm making her a custom dress right now too!

OMG its really beautiful. Nice to see this. I found some excellent fabrics from Spandex Collectionin NYC near me which was a nice weight, not too beefy.
Stretch Sequins
Glitter Stone
Designers Lace
Stretch Lace
Printed Spandex

Wow! All your clothes are stunning. You look amazing and I love your sense of style. Thanks for sharing. Love from Fabrics World USA